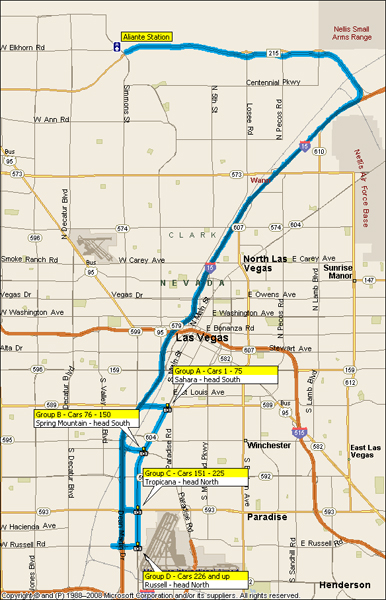 For those of you that aren’t subscribed to the AMVIV Mailing List (which you really should be), Agro sent out another update today. Friendly reminders and a change to the Strip Cruise.

As promised, here is a list of suggested things you might want to bring to AMVIV this year. It’s not an exhaustive list, so make sure you pack anything else you think you might need.

Ok. On to other things you need to know. Pre-registration will close at 10pm Pacific time on Thursday (3/18) night. Once pre-reg closes, you will no longer be able to buy breakfast tickets, the shirt/hat combo or guarantee that you will get your size of shirt. We had a nice bump in registrations after the email I sent out earlier this week, here’s hoping that happens again. We’re getting right down to the wire now.

We are also changing the Strip Cruise again. I told you in the last email that we’re changing the staging point to a little further south and having the Police help us out by controlling the traffic lights to get everyone out onto Las Vegas Blvd. **THAT IS NO LONGER THE CASE.**

Our wonderful police dept here in Las Vegas decided at the last minute that instead of charging us around $300 for this, they were going to charge us over $1200, which we can’t afford. So the organizing committee has decided on a new plan for the Strip Cruise. Ignore what is in your event book and instead follow these directions that were handed to me to pass along. A printed copy of these will also be in your registration bags.

Our experience with previous Strip Runs has shown us that it is impossible to establish a “convoy” of MINIs lasting for more than a few stop lights.

The strategy this year will be to have all AMVIV MINIs cruising the Strip within the same time frame but spread out somewhat evenly along the 5 mile Strip corridor and going in different directions.

This will give us a much greater opportunity to see fellow MINIs in opposing traffic; more photo ops, more chances to wave and honk at one another.
So here’s the plan: (See map above)

Las Vegas Blvd. (the Strip) is undeniably, block for block, the most photogenic 5 miles of pavement on the planet. On a Friday night, at this hour, it is thick with traffic—– but the traffic does move in spite of momentary periods of apparent gridlock. Let’s be a noticeable part of that traffic. Traveling from Sahara to Mandalay Bay Hotel is, on average, 20-30 minutes in either direction. Let’s remember, we are not in a hurry. Just “Go with the flow, as slow as the flow may go!”

The objective of our cruise is to create a greater than normal presence of MINIs on the Strip where the photo bugs among us can capture bright photos and videos of the iconic VEGAS STRIP with MINIs in the foreground.

The North/South lanes of the Strip are usually close enough together to offer great shots of opposing traffic with the Big Resorts as background.

For maximum exposure, this cruise should have MINIs going up and down the Strip from 9PM to 10:30 PM. Save any exploration of points of interest until after 10:30 PM.

“Up and down the Strip”, for the purpose of this cruise, is from the Sahara Hotel to the Mandalay Bay Hotel.

There are several traffic lights across from the Sahara Hotel and Mandalay Bay Hotel where it is legal and safe to make u-turns. The perspectives from both North and South lanes are unique and rewarding for all cameras, still and video.

Enjoy the views, be patient with the traffic, and take lots of pictures.

Another thing I need to remind you of is that the Thursday run to Calico will incorporate the first ever “official” AMVIV group photo shoot and we’d love to have as many MINIs and Minis taking part as possible. For the West Coast MINI clubs who are convoying in, this would be a great way to kick off AMVIV weekend, and you’ll get to convoy the last 170 miles or so with a HUGE group of MINIs.

I’m still eagerly awaiting people telling me they need foamboard to enter the 4th annual AMVIV Photo Show. I’ve had a couple of people express some interest, but no-one has for-sure entered yet. Even if we only get 1 entry, it will be displayed, but I’d love to see a couple of dozen again as we’ve had in past years.

I know I’ve still forgotten things, but it’s taken me 2 days to get this much written, so I’m going to send it now. Look for an update with whatever I forgot in a couple of days.

See you in a couple of weeks.
Andrew “Agro” Ross.